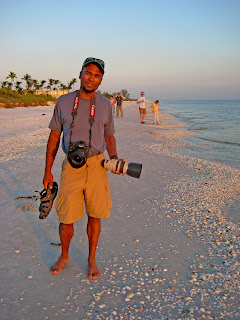 Introducing guest blogger Dudley Edmondson, an African American photographer who shares how he came to photograph African Americans in the outdoors. This is the first of 2 parts:
You know photography has been a part of my life so long it is difficult to remember when it all started. It began as a way to document my bird sightings as a birder way back when I was a freshman in college. Then the idea of it becoming a potential career became a reality when I decided to move from Ohio to Minnesota. I decided Minnesota had everything I needed to be a successful nature photographer so I put down roots in Duluth the gateway to the great north woods full of eagles, wolves and many other exciting species not found in Ohio.
Things all came together after several years and after a very successful career as a nature photographer I decided to challenge myself again and become an author. The subject matter would be very different from what I had done as a photographer. This time I wanted to tell the story of people like me, African Americans who had a deep and unwavering connection to the earth and nature. The book project became “Black and Brown Faces in Americas Wild Places”
These people I felt could help black folks from coast to coast find their way back to the natural world their African ancestors once knew as well as they now know their own backyards. I am certain that as humans our mental and physical being is inexplicably tied to the natural world around us. People who submerge themselves in nature both physically and mentally our simply healthier people. That is the message I have tried to convey with my book. Trying to get people to understand that is not always easy. If you tell someone that the health of the ecosystem not only effects their health but that it is actually more important than anything else going on in their lives right now, few would be able to grasp that concept. Without your mental and physical health what do you really have? Without clean water and clean air what good really is anything else you might posses?